New Books For Me!

Home / New Books For Me!

New Books For Me! 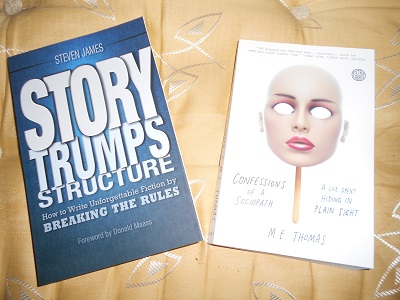 As if my TBR pile isn’t big enough.

Story Trumps Structure I heard about on another blog. It purports to be a writing process book for pantsers. I haven’t had a chance to get into it yet, but the recommendations are enthusiastic. It’s been a while since I’ve read anything about craft, so I’m looking forward to another viewpoint on the process, and maybe picking up a few pointers.

Confessions of a Sociopath is research for my Byzantine fantasy world, and one of the main characters. I’ve worked with people I could confidently identify as sociopaths, but it needs more than that to be able to accurately write one. I have several scholarly texts on the topic of sociopaths and psychopaths, but this is the story of someone who actually is a sociopath. While the other books will provide the limits and possibilities of the character, I’m looking to this one to provide the voice.

Three-quarters through final revisions on the werewolves before I send it off to beta. Waiting to hear from Storm Moon on whether they’re still interested in the sequel to the weresquirrel. And having strange conversations with my editor that result in me being told to go set something on fire.

Okay, back to the trenches.

You can leave a reply or Trackback this post.